Sibiu, located in the centre of Romania, oozes history and culture. Records of its existence date back to 1191, while it was designated European Capital of Culture in 2007. It makes for one of the most scenic service parks in international rallying with quaint historic buildings lining the Piața Mare, a large square in Sibiu where it’s located.

The competition starts in earnest with the Qualifying Stage from 10:00hrs local time on Thursday 25 July. Following two runs of Free Practice at Sibiu’s rallycross circuit from 08:00hrs, priority drivers get one run over the 3.42-kilometre course to set their best time. The fastest driver will then get to choose their starting position for leg one first with the second fastest driver next to make their selection and so on until all priority drivers have made their choice. Road position can be pivotal to the outcome of dry gravel rallies as drivers will be eager to run further down the order to benefit from a ‘clean’ and stable stage surface that’s been ‘swept’ clear of loose gravel. 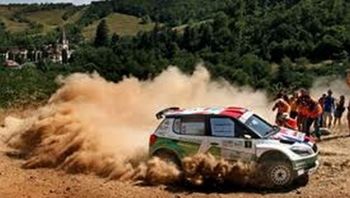 There will be night fever in Romania with two tests – Paltiniş and Şanta – run under the cover of darkness on Friday’s leg (26 July), which features seven stages over a competitive distance of 101.80 kilometres. To increase the challenge facing drivers and the spectacle for the fans, the 10 kilometres of Paltiniş is on asphalt, which drivers will tackle with gravel tyres and settings.
Saturday’s route includes two more Tarmac stages, plus the monster Gâtu Berbecului, which at 30 kilometres is the longest of the 14-stage event and is run twice.